In My Right Mind 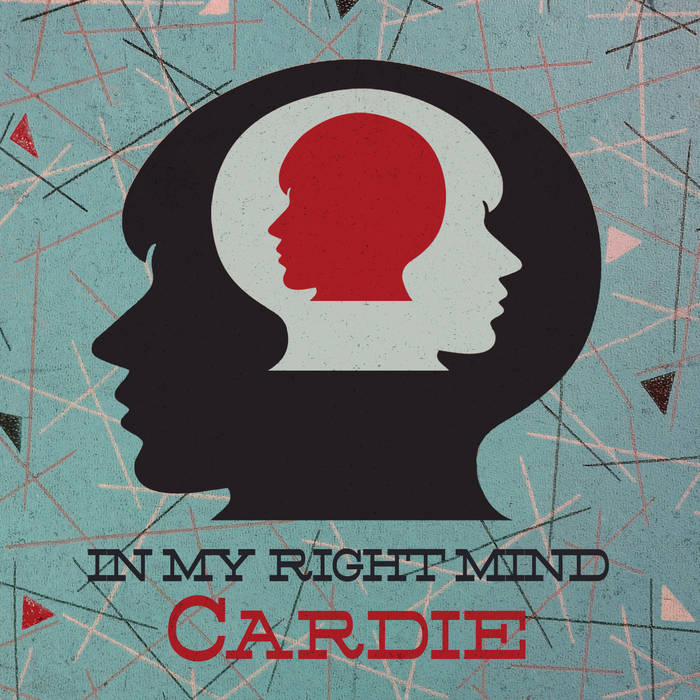 Light blue skies, red Autumn rains, calm silver seas and secret moonlit coves are captured as snapshots of a significant pilgrimage between the shadow and sunlight of his mind.

Written and produced almost entirely solo, this first offering showcases some of the best tunes to come out of his various bedrooms and sheds over the last decade.

All tracks written, arranged, & recorded by Cardie except . . .

Cello recorded at Room4Studios in Bristol by Philip Davies

For more information go to www.CardieMusic.com

Lonely I was destined as a child,
To have a different take that took a while,
The colours that I saw I could not tell,
But I'm telling like it is, for you now,

Stranded in another space + time,
But its time thats been too long for me to find,
Waking up and breaking out into this future now,

Shadows from back then are still here today,
They try to bring me back to earth and make me pay,
But I don't have to be another one, thats wasting this future now,

Getting sick, of the same old tricks that they do . . .
Pull the thread, and you find instead, something true . . .

DON'T WAKE ME UP

I have been dreaming, of a something so precious,
Rain and thunder and falling leaves through my mind,
Can't wash it away

Autumn and winter, they can't stop me from hoping,
Icy rain cuts my cheeks now, yes its cold,
Warm inside my heart

I'm breathless, many times have I felt like this,
Who can fight such a gentle voice, sweet and soft,
Flows right to my heart,
No-one is like you, show me someone just like you,
Won't find anyone like you, sink my heart,
Drowning deep inside

I did think that,
You could do no wrong,
All I can blame you for,
Is the beauty I see in you,
I don't think that you meant to be,
Luring me closer with loveliness,
From your eyes,

How much I like you, more than roses can tell you,
All the choices I'd choose you,
Heaven knows,
What I see in you

Darling I like you, more than roses I like you,
All the choices, I'd choose you,
You don't know,
What I see in you

All that I want , in life is love,

I don't want for nothing else, if it ain't about, peaceful vibin,
I ain't got no secrets girl, its just love has . . . got me singing

I don't want for nothing else, if it ain't about, peaceful vibin,
I ain't got no secrets girl, its just love has . . . got me singing

Nothing seems like its really there,
I'm getting drunk on the purest air,
I blame the sun but he doesn't care,
You won't get a blind bit of sense from me cos I'm not there

Makes me smile like theres nothing wrong,
I gotta wait but it won't be long,
The birds are still singing on and on,
I'm not gonna sleep, now I don't know where,
My mind has gone,

Oh Mumma, I got that feeling on,
Oh Mumma, its comin on [so strong],
Oh Mumma, I'm in the mood tonight,
She's completely outta sight!

Seconds move like a thousand miles,
The flowers smell like a million smiles,
Well you might say I'm a juvenile,
But I'm not gonna waste any more of my life in denial

Every day I pick up my shield and fight,
Keep battling the demons through the night,
Do you believe this is where I want to be?

Its like sailing in a paper boat, hoping not to drown,
And darlin don't you know . . . I'm going down . . .
What would you understand, when I been crying out for your love,
And its the sign of a suffering man when he's crying out for your touch,
Darling, theres only so much,
So much that this man can stand

Never thought I'd ever be a lonely man again,
Since the day you took my hand in your hand,
Never thought I’d feel the salty tears bitter down my face

But thru the time it takes us to realise,
Theres something deep that’s deeply wrong inside,
Don't leave me hanging on what you think you see

Its like I'm sailing in a paper boat, hoping not to drown,
And darling don't you know I'm going down,
But what would you understand,
When I been crying out for your love,
And its the sign of a suffering man, oh yes it is,
When he's crying out for your touch - oh darlin' ,
Theres only so much,
So much that this man can stand
Darling, theres only so much that this man can stand

I love her with strings of my heart,
With the tenderness of my fingers,
And on the days that we spend apart,
I feel a sense of her spirit linger,
She has eyes like the crescent moon,
Dancing on a river,
And now I know that she's got my heart,
What else can I give her?
What a precious treasure

I've sailed the sea at night,
The silver seas are bright,
I've seen, nothing,
So beautiful

The wind can blow tonight,
Won't make me lose my sight,
To see, I've been,
Propelled by love,

I've come here, long ago
As a child touched silver on my toes,
And now I've heard again,
My name . . .

Money, we got it,
Last a while, an' we lost it,
Thought I had it - it had me,
Can make us miss, our destiny

"We was only thinking, of getting ourself along,
Just a little better, and we can make a real comfy home,
Theres such alotta money and we can buy nearly anything"
And we got it all . . .

Dirty, pity,
Waste it on, the city,
Lotsa livin' - you know that,
Not much giving, without getting back,

Of all the scars I see,
To complicate within,
Of all the ones I'd choose,
To help me lose this skin

LEAD ME TO THE WAY

Lead me to the way,
Help me find a way out, oh yeah,
Sometimes it all falls, infront of me,
Others it hangs over me

Lead me to the way; something I can feel with both my hands,
You'd bless my life again, inside of me,
Now thats getting close to the pain

We're gonna feel the dark sometimes
It comes as bright as day,
Take heed,
Don’t listen to its promises,
Or you will fade away

Lead me to the way; Evil is a cruel & pleasant liar,
He'd risk our souls for so much less,
Than it takes our eyes to confess

Lead me to the way, oh yeah,
To unlearn all the roads inside my head,
I'd have a heart alight and flaming red,
And bursting out through all that I said

We're gonna feel the dark sometimes,
It comes as bright as day,
Those days,
The path looks pretty narrow,
But it wont fade away

I HOPE YOU LOVE PEACE

I hope you love peace

If love is what it is, then I don't wanna miss,
A chance to love again,
Oh yeah,
Amen

Bandcamp Daily  your guide to the world of Bandcamp

Guests include Kassa Overall and Muriel Grossman, plus an LP of the week by Van Hunt.